Written in Stone
New writing from the Isle of Purbeck 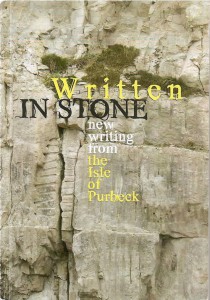 from Paul Hyland’s Foreword to Written in Stone:

It is true to say that the writing in this book came out of a series of workshops held at California Barn on the Purbeck stone plateau south of Swanage, but it is a partial truth. The writing workshops catalysed some work, and have been the occasion for much of it, but twelve lifetimes have gone into what you will read here. For me, it has been a privilege to work with writers prepared to put so much of themselves into their words. A committee has never written a masterpiece and, although the Purbeck Footprints writers have been stimulated by participation in the group and by the collective ambition of its members, each has a voice and an attack that cannot be mistaken.

Purbeck provokes passion. It was my first love and I have been fortunate to write about it. I believe that readers will find much to be thankful for in these pages, from writers who inform us with academic discipline, lift us with poetic exaltation, compel us with narrative drive or engage us with the imaginative risks they take on our behalf. I have been excited by their insights; you will be too.

Stone is endlessly seductive, addictive and demanding. The men who work it will tell you so. We are grateful to those who, like Kevin Keates, Treleven Haysom, Alan Lander and Harold Bonfield, talked to us about it. We owe a debt to quarriers and stonecutters who put pen to paper, as Eric Benfield and James Corben did. We acknowledge the help of David Haysom and the team at Swanage Museum and Heritage Centre, and of Reg Saville and his co-workers at Langton Matravers who have invested so much in celebration of the culture of stone.

The struggle with stone has something in common with the struggle with language. Sometimes it defeats us; sometimes we botch a job; sometimes we win through. The pen is not mightier than the chisel, but paper, though it carries its words more lightly than limestone, can speak eloquently in praise of the hard stuff. Limestone and paper are composed of materials that once lived; under the hand of mortals like ourselves they live on.

The non-fiction, fiction and poetry in Written in Stone was stimulated by a series of workshops for writers, led by Paul Hyland at California Barn, Swanage, during 2007-08. Augmented by walks and talks, together with classes for pupils in six Purbeck schools, these sessions were at the heart of Purbeck Footprints, a creative writing project organised by Artsreach in collaboration with The Purbeck Keystone Project (co-ordinated by the Purbeck Heritage Committee and supported by the Heritage Lottery Fund).