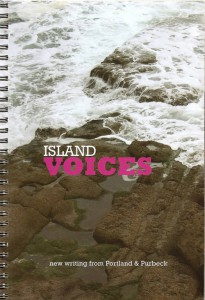 Island Voices was a community-based Artsreach project in Dorset; it was part of the Time and Tide initiative exploring the theme of change in coastal communities throughout the south-west of England. It was led by Paul Hyland, musician and songwriter Sammy Hurden, and writer Nicola Richardson.

Island Voices began aboard the prison ship, HMP The Weare, where Paul Hyland led writing workshops, and HMP Young Offenders Institution, Portland. It continued with writing and singing workshops at Reforne and Fortuneswell on Portland and at Langton Matravers in Purbeck.

Local writers, singers and musicians wrote fiction and non-fiction, poetry and lyrics, and performed the work at concerts in St George’s Church and above Ope Cove on Portland, at Durlston Country Park and Langton Matravers Village Hall in Purbeck, and at the Phoenix Theatre, Exeter.

The isles are full of voices

This exciting collection of fiction and non-fiction, poetry and lyrics, created by local writers, celebrates the distinctiveness of Portland and Purbeck. Writers and singers on Dorset’s ‘almost-islands’ worked with some of the south-west’s most inspirational arts practitioners – Paul Hyland, travel biographer and poet, Sammy Hurden, musician and songwriter, and Nicola Richardson, writer. The blend of songs (set to music by Sammy Hurden, performed by local voices and available on the accompanying CD) with new prose and poetry of exceptional quality represents a rich legacy of contemporary writing.