Evidence
What lives leave behind 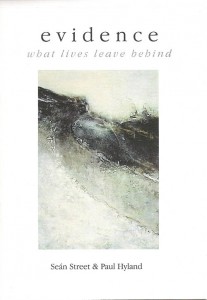 In the Spring of 2002, Julie Herring, who managed the Atrium Gallery, was considering mounting a mixed media exhibition in which Seán Street, poet and broadcaster, would collaborate with his daughter Jemma, painter and printmaker. Seán and Jemma had worked together before, notably on the collection Radio and Other Poems (1999), and both were intrigued by the passage of time, the detritus of occupation and traces left by inhabitants of places, often urban and contemporary.

At the same moment, Paul Hyland, poet and travel writer, was working with painter Brian Graham on the catalogue for Graham’s exhibition, Ochre & Ice (Hart Gallery, London, 2003). In his essay, and in accompanying poems, Hyland explored Graham’s obsession with the landscape of the ancient past which resonated so profoundly with his own practice as a biographer of place, interested in layers of geology, archaeology, history and everything up to and including gossip.

Happily, connections were made, mediated by Julie Herring. Paintings and prints stimulated poems, and in turn the new writing inspired new pictures. All four artists contributed their work to the Atrium Gallery’s Evidence exhibition. At least some of the evidence of what happened is printed here.