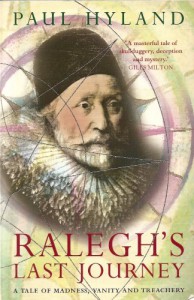 Sir Walter Ralegh was the greatest courtier of his day, brilliant and wily, but spent years imprisoned in the Tower of London. In the summer of 1618, his last voyage a failure, James I ordered him to be escorted from Plymouth to London and the scaffold.

Paul Hyland unfurls the story of Ralegh’s last twenty weeks, of his grotesque behaviour en route, of the web of deceit woven between him and his cousin ‘Judas’ Stucley, of their companion the French physician and double-agent Dr Manoury. On several occasions Ralegh has the chance to escape and refuses it; then, when he at last opts for freedom (wearing a false beard), in a sprint down the Thames by rowing boat, he finds himself again betrayed.

“A masterful tale of skullduggery, deception and mystery…told from original sources…which brings an electrifying immediacy to the unfolding events.”

“Moving in its portrait of a mind at the end of its tether, Hyland’s account gives us a new perspective on Ralegh as man and explorer.”

“A little-known slice of a well-known life…challenges many of the assumptions... demonstrates that the subject’s path to death is as important as the path through life.”

“What should have been a quick trip wound up taking nearly three weeks and was, as Paul Hyland makes clear in his engaging account, more than a little fraught. High treason? More like low comedy... Mr Hyland narrates the whole ignominious episode with aplomb.”

“Hyland has captured the consequences, ordered them and, with particular skill and care for detail, tells a fascinating and compelling, terribly human story.”

“Paul Hyland was inspired to write this book on coming across Stucley’s document of self-vindication…he also writes of the curious involvement of the French acting ambassador Le Clerc, and convincingly reveals that Manoury was at the heart of it.”

“A brilliant example of a recurring type in English politics, the arrogant court favourite who fell from the heavens, gained reinstatement but fell again in a shower of sparks.”