Backwards Out of the Big World
A Voyage into Portugal 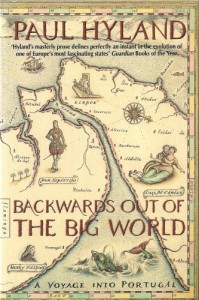 Europe’s westernmost edge is Portugal: “a country underestimated out of ignorance, a history that amnesia has wiped clean, a dictatorship which lasted forty years, a revolution we hardly noticed”. Portugal’s navigators opened up most of the globe; the paradigm world power, it hung on to its colonies the longest. In this book, we discover the discoverers now, as they turn from far horizons to face Brussels.

Paul Hyland arrives by cargo boat, following Henry Fielding’s Voyage to Lisbon. Hyland ascends the Tagus from Lisbon, through Portugal’s heartland and across Europe’s oldest intact frontier to Spain. He meets today’s writers, in the land of Camões and Pessoa, and probes the nation’s psyche with fishwives, bullfighters, businessmen and gypsies. He talks with the pretender to the defunct throne, and encounters Portugal’s once-and-future king, Dom Sebastião, supposed to have died in 1578, but still alive and well and waiting.

The Portuguese say, “Once we were so great, now we are so small.” Backwards out of the Big World is a brilliant and surprising look at one of Europe’s most extraordinary and little-known countries, by an unusually gifted writer.

Praise for “Backwards Out of the Big World: A Voyage into Portugal”

“Hyland’s masterly prose defines perfectly an instant in the evolution of one of Europe’s most fascinating and yet underestimated states.”

“If you are going to Portugal, you must carry this book in your pocket... he leaves an abiding sense of a country that has shed its skin.”

“Hyland is particularly good at catching the passing moment of Portuguese lives at unguarded moments ...an almost hallucinatorily lucid exposure.”

“A fascinating and sympathetic account of a journey through Portugal by a man who knows the country’s people, history and literature as few foreigners do.”

“I think he has a Portuguese soul.”

“Prepare for the fact that you’ll probably want to go to Portugal too, after you’ve read this book.”